Home / Degrees / Education / What is Transactional Leadership? How Structure Leads to Results

What is Transactional Leadership? How Structure Leads to Results 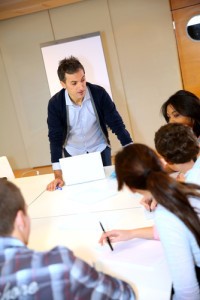 A transactional leader is someone who values order and structure. They are likely to command military operations, manage large corporations, or lead international projects that require rules and regulations to complete objectives on time or move people and supplies in an organized way. Transactional leaders are not a good fit for places where creativity and innovative ideas are valued.

This type of leader sets the criteria for their workers according to previously defined requirements. Performance reviews are the most common way to judge employee performance. Transactional, or managerial, leaders work best with employees who know their jobs and are motivated by the reward-penalty system. The status quo of an organization is maintained through transactional leadership.

Differences between transactional leadership and other leadership styles

History of the transactional leadership theory

Max Weber, a 20th-century German sociologist, made an extensive study of leadership styles and divided them into three categories: traditional, charismatic and rational-legal, or bureaucratic. In 1947, Weber was the first to describe rational-legal leadership — the style that would come to be known as transactional leadership — as “the exercise of control on the basis of knowledge.”

Transactional leadership theory is based on the idea that managers give employees something they want in exchange for getting something they want. It posits that workers are not self-motivated and require structure, instruction and monitoring in order to complete tasks correctly and on time.

The transactional leadership style was widely used after World War II in the United States. This was a time when the government concentrated on rebuilding and required a high level of structure to maintain national stability.

Political scientist James McGregor Burns was one of the most prominent authors to advance Weber’s theories. In his 1978 book “Leadership,” Burns argued that both transactional and transformational leaders must be moral and have a higher purpose. In Burns’s model, transactional leaders espouse honesty, fairness, responsibility, and honoring commitments.

In the 1980s and 90s, researchers including Bernard M. Bass, Jane Howell and Bruce Avolio defined the dimensions of transactional leadership:

Many current leadership theorists agree that principals of transactional and transformational leadership can be combined for ideal outcomes for both management and the workforce.

The transactional model is likely to succeed in a crisis or in projects that require linear and specific processes. This model is also useful for big corporations, such as Hewlett-Packard, a company known for its extensive use of management by exception.

Gen. Norman Schwarzkopf was born in 1934 and graduated from West Point. He went to Vietnam as an advisor to the South Vietnamese army. During that war, he was wounded twice and awarded three Silver Star medals. In 1978, he became a brigadier general; he attained a four-star ranking in 1988. General Schwarzkopf was commander-in-chief of the U.S. forces in Operation Desert Storm, responsible for tens of thousands of troops in Iraq and Kuwait. He used the rules and regulations of the military to coordinate operations on several continents.

Born in 1913, Vince Lombardi is best known as the coach for the Green Bay Packers. He signed a five-year contract with Green Bay in 1959. Under his leadership, the team never had a losing session. Over the course of his career, he led the team to a 98-30-4 record and five championships. The Super Bowl trophy is named after him. He used to run the Packers through the same plays in practice over and over again. The team’s opponents knew the plays Lombardi would run, but the team was so well trained that many teams had trouble defending against them.

Bill Gates was born in Seattle in 1955. In his early teens, he met Paul Allen at the Lakeside School, where they both developed computer programs as a hobby. When Gates went to Harvard, Allen went to work as a programmer for Honeywell in Boston. In 1975, they started Microsoft, and by 1978, the company had grossed $2.5 million, when Gates was 23. In 1985, Microsoft launched Windows. Bill Gates is now one of the richest people in the world. As a transactional leader, he used to visit new product teams and ask difficult questions until he was satisfied that the teams were on track and understood the goal.

Howard Schultz was born in 1953 and grew up in the Brooklyn housing projects. He escaped the projects with a football scholarship from Northern Michigan University. After college, he started selling coffee makers to companies that included the Starbucks Coffee Tea and Spice Company, which originally sold coffee beans rather than made-to-order drinks. He was hired by the company in 1982. In 1984, Schultz opened the first Starbucks coffeehouse based on the concept of an Italian espresso bar.

Schultz wanted to grow Starbucks, but the owners wanted to stay small. Schultz left and opened his own company in 1985. With the help of investors in 1987, he bought Starbucks and merged the two companies. By 2006, Schultz was ranked 394 on Forbes magazine’s list of the 400 richest people in America. As a transactional leader, he was responsible for the vision and implementation of the Starbucks model.

Vince Lombardi: “The price of success is hard work, dedication to the job at hand, and the determination that whether we win or lose, we have applied the best of ourselves to the task at hand.”

Howard Schultz: “Starbucks is not an advertiser; people think we are a great marketing company, but in fact we spend very little money on marketing and more money on training our people than advertising.”

Here are some of the characteristics of transactional leaders:

Advantages and disadvantages of transactional leadership

There is definitely a place for transactional leadership in the world today. One of its best uses is in multinational corporations where not all of the workers speak the same language. Once the structure and the requirements are learned, it is easy for workers to complete tasks successfully. This works because transactional leadership is simple to learn and does not require extensive training. The transactional approach is easy to understand and apply across much of an organization.

The military, policing organizations, and first responders use this style of leadership so that all areas of the organization are consistent. It is also easier to apply in a crisis situation, where everyone must know exactly what is required of them and how a task is to be done under pressure.

To many people, money and perks are a powerful motivator. Many people need a job to pay the bills. They have other obligations and distractions and would just as soon know exactly how to do their job in order to keep it and reap the rewards.